'Would you cross a land of magic, dark creatures and hidden secrets to face your own deepest fear?'

After being shot, Suzy and her friend, Bill, are offered a second chance at life in The Lost Town Of Man's Crossing, a land to which the chosen few are transported by their personal Crossing Creatures. There, Suzy encounters the evil Cole, who is all-out to gain the highest power of the land.

But Suzy comes from a magical family: her grandmother, Miss Hollow, founded a coven called Hollow-Wings, and her grandfather left her a secret, life-fulfilling pouch. Soon, Cole craves that secret pouch more than anything.

It’s Suzy versus Cole – and one of them has met their match. 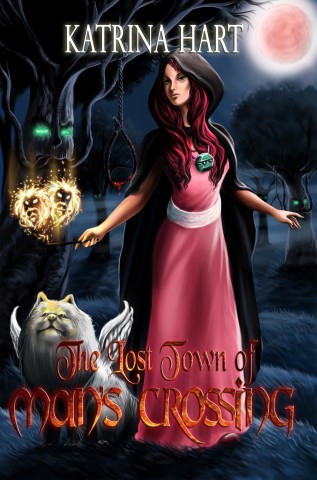 From the second that Suzy lands – with a dramatic bump, literally – in the Lost Town of Man’s Crossing, her already extraordinary life becomes one of opposites: magic and realism; good and evil; past and future. Her boyfriend, Bill, has gone missing and she’s troubled by the presence of Stormy-Black, a shadowy creature that has plagued her since her childhood.

Now it appears that Stormy-black, or Erebus, as he prefers to be known, is joining forces with the evil Cole in an attempt to destroy this land of new beginnings. It’s Suzy’s job to help the Crossing Creatures – those that help people move between life and death – survive; after all, they saved her when she and Bill were shot and left for dead…

It’s a bit of a cliché to draw parallels between contemporary fantasy novels and Harry Potter – and this story is nothing like JK Rowling’s creation – but it’s the sheer ‘bigness’ of the world Katrina Hart creates, plus the fascinating interweaving of fantastical and realism that connects the two.

Suzy and Bill (when he arrives) are holding down ‘day jobs’; she becomes the town’s healer and he is the law enforcer, whilst coming to terms with such entities as glow-babies, Ray-Roller, the Hobble-Fluff and Hollow-Wings. Suzy, too, has her own personal protector, a Crossing Creature called Aidyn – a pink and naked winged-man…There is no shortage of humour amongst the drama.

In addition, this is a love story between two very human people, and a tale of bravery, resilience and honour. We never doubt that Suzy, with Bill at her side, will save the world, but the question is can she save herself and her future, too. What if she has to make a choice?

I first met Katie (Katrina Hart) in an online writing class, where I remember her saying she learned to fall in love with her own stories. That really shows here; she’s full of enthusiasm for the world she’s built and the characters she’s developed and because of that, we can’t but believe in them too.

Katie’s first book, Finding Destiny (a loose prequel to The Lost Town of Man’s Crossing, but both are essentially standalone novels) was one of the first magical realism books I really enjoyed (and understood!) so if fantasy isn’t really your thing – give this a go anyway. And if it is, then I defy you not to love it!

The Lost Town of Man’s Crossing, a YA/Adult crossover novel is published today and available by following the link.

Oh, and it's Katie's birthday today - so the very best of wishes to you, Katie!

Anne, you touched my heart with your thoughts on my new release.
Thank you for helping me celebrate the release of my new book and my birthday. xx

0 Cancel Reply
Anne, you touched my heart with your thoughts on my new release. Thank you for helping me celebrate the release of my new book and my birthday. xx
Cancel Update Comment